The Next Generation Sportage

Entering its fourth-generation, the all-new 2016 Kia Sportage features a bold, progressive design, with the vehicle’s designers creating a sense of power and agility from every angle. Echoing the contrast of smooth and sharp shapes found on some of the most iconic modern fighter jets, the Sportage creates visual harmony out of the tension between sharp, defined feature lines and smooth surfacing.

The ‘face’ of the all-new Sportage represents the biggest change to the car’s design, with the car’s headlamps no longer integrated with the grille for the new model, instead sweeping back along the outer edges of the more sharply-detailed bonnet and bolder wheel arches. Immediately recognizable as a Kia, the Sportage’s lower, wider ‘tiger-nose’ grille adds more volume to the lower half of the Sportage’s face, resulting in a more imposing appearance and a more stable-looking stance. 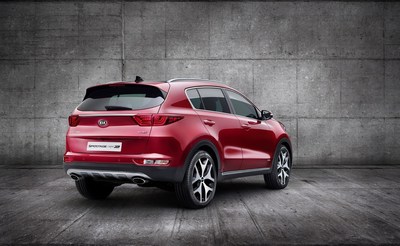 The all-new Sportage is characterised by its sportier, more raked profile. From the side, the all-new Sportage retains the swept-back silhouette of the outgoing model, with a roofline that tapers slightly towards the rear of the car, longer front overhangs, shorter rear overhangs and longer wheelbase. Smooth bodywork, bolder wheel arches and sharp lines endow the Sportage with a more dynamic, muscular look.

At the rear, the horizontal forms and surface volume emphasise the car’s width and give the compact SUV a more stable appearance. Inspired by the 2013 Kia Provo concept car, the slim combination lamps are joined by a strip that runs the width of the rear, while turn signals and reversing lights are separated, relocated lower down to add more visual weight and a greater sense of stability to the lower half of the car.

The design of the new Sportage has been led by Kia’s European design studio in Frankfurt, Germany, with input from the brand’s Namyang, Korea and Irvine, California design centres.

About Kia Motors Corporation
Kia Motors Corporation (www.kia.com) – a maker of quality vehicles for the young-at-heart – was founded in 1944 and is Korea’s oldest manufacturer of motor vehicles. Over 3 million Kia vehicles a year are produced in 10 manufacturing and assembly operations in five countries which are then sold and serviced through a network of distributors and dealers covering around 180 countries. Kia today has around 49,000 employees worldwide and annual revenues of nearly US$45 billion. It is the major sponsor of the Australian Open and an official automotive partner of FIFA – the governing body of the FIFA World Cup™. Kia Motors Corporation’s brand slogan – “The Power to Surprise” – represents the company’s global commitment to surprise the world by providing exciting and inspiring experiences that go beyond expectations.

About Kia Canada
Kia Canada Inc. (www.kia.ca – www.facebook.com/kiacanada) a maker of quality vehicles for the young-at-heart is a subsidiary of Kia Motors Corporation (KMC),  which was founded in 1999 and sells and services high quality, class leading vehicles like the Soul, Forte, Sorento and Cadenza luxury sedan through a network of 188 dealers nationwide. Kia Canada Inc. employs 160 people in itsMississauga, Ontario headquarters and four regional offices across Canada. Kia‘s brand slogan “The Power to Surprise” represents the company’s global commitment to surprise the world by providing exciting & inspiring experiences that go beyond expectations.